Who’s ready for 2014? As you look forward at the new year we’re in, don’t forget that it’s also time to look back and reflect on 2013. Even if you aren’t into making hardcore resolutions for the year, it does make sense to evaluate your financial performance in the previous year and plan to improve your performance for the coming year.

How Do You Stack Up To Other Americans?

As you figure out what to do with the new year, you might get some ideas from others. The Principal Financial Well-Being Index: American Workers takes a look at what people feel they did wrong in 2013, and what they hope to accomplish in 2014.

Budget busters (not necessarily blunders) for 2013 include eating out, groceries, and gas.

I find it encouraging that so many people are aware of the need to save more, and that it appears that many Americans are shying away from debt. 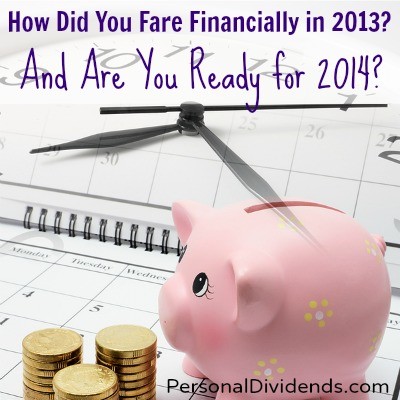 (Although I guess the flip side is that debt is popular, but Americans don’t classify it as a blunder.)

It’s not very surprising that eating out and groceries are considered major budget busters. I rarely regret spending money to eat out, but I know that some people might view spending a lot on dining out as a financial blunder rather than a more innocent budget buster.

With groceries and gas, there is only so much you can do. You can employ strategies to reduce your costs, but in the end you reach a point where you are pretty much stuck. When you can’t cut anymore, you need to figure out how to earn more.

Principal’s index also takes into account expectations for 2014. According to the index, 40 percent of workers expect that the economy will get worse in the coming year. This represents a rather large jump, since only 27 percent of last year’s respondents expected a worse economy.

Even though many workers think that problems are coming, they are still happy with their own individual situations. Principal reports that 42 percent of employees are happy with their current financial well-being, an increase from last quarter’s 33 percent.

I can see how this information makes sense, though. You can be happy with your current situation and still worry that things are going to get worse for the economy.

If you are someone who is concerned about the economy, but happy about your situation, now is a good time to consider your options, and do what you can to shore up your position. Even though you might feel good about the situation now, there’s no telling how you’ll feel if you experience a financial setback.

So, what are you looking forward to in the new year? Do you expect things to improve? And how will you overcome the financial mistakes you might have made in 2013?