We ordered take out once again, utilizing the site Grub Hub.

For an appetizer we ordered steamed Pot Stickers ($4.95). No one really cared for these. I prefer mine with pork, and these were made with chicken. In addition, perhaps because they sat in the container while being delivered, they seemed too wet on the outside. Maybe these would have been better if eaten fresh at the restaurant.

I ordered New Pot Fried Rice with Shrimp (8.95), which included stir fried rice, egg, broccoli, onions, green onions, tomatoes and shrimp. This did taste good, but there were too many onions in a near raw state in it. I should have ordered it without onions.

For the kids we ordered Pad Siew (7.95). This dish has wide noodles stir-fried with broccoli, egg and tofu in a sweet oriental sauce. My son liked this, but he preferred what my husband ordered. 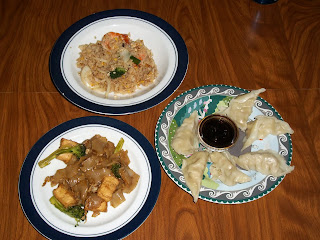 My husband ordered Bamee Wonton ($7.95) (steamed egg noodles, wontons, BBQ pork, bok choy, bean sprouts, fried wonton, green onions and cilantro). He liked the wontons, but found the dish overall to be bland; he would not order it again. 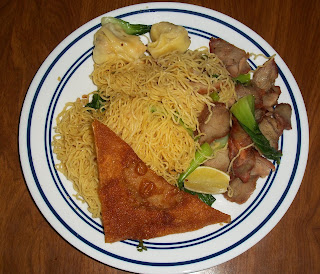 We like the plentitude of the vegetables that are typically served in a Thai restaurant, but there did not seem to be many in these dishes. I don’t know if it was because of the meals we ordered or if this restaurant just doesn’t include many veggies, but we were disappointed by this.