Is it Time to Dust Off the 15-Year Mortgage?

It’s the modern exemplar of fiscal responsibility – the mortgage you pay off in half the time of a standard one. Granted, people who carry 15-year mortgages are generally the same ones who alphabetize their refrigerators and iron their gym clothes. But people like that are worth emulating in a society where the populace now regards mortgages and credit card debt as no more obligatory than rural speed limits.

Obviously, paying a mortgage off in half the standard time means you’re making payments twice as big, or close to it.

But you aren’t. Here are a couple of graphs that show how long it takes to start making a dent in the principal when you finance your house over 30 years, vis-a-vis 15 years. We used standard market rates, which we’ll quantify in a second. The purple line is your cumulative interest payment, which you obviously want to keep as low as possible. The purple line moves in concert with the yellow line, which is your principal balance: you want the yellow line to take as short a path as possible from the northwest corner of the graph to the southeast corner. 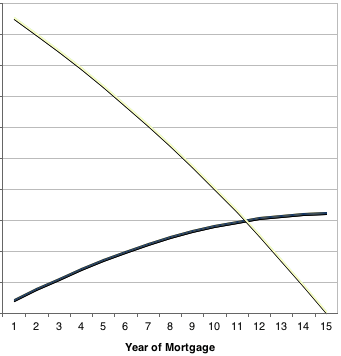 Around 1981, 30-year mortgages were going for 18%. Just for sheer horror value, here’s a comparable chart from then. We enclosed it in a thick red border to denote danger: 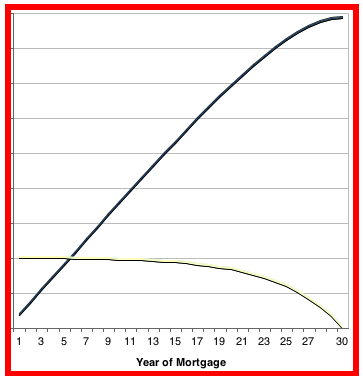 It’s true: There are homeowners whose 30-year mortgages are coming due next year, who as recently as 2008 still had less than half equity in the house. These people might be your parents. Don’t show them this article.

But getting back to the relevant charts, the first two: we’re not criticizing people with 30-year mortgages. Given such variables as human life expectancy, house obsolescence, and wages and salaries, 30 years has always been the historical happy medium for a mortgage term – not so long that you’re on the hook into your senescence, and not so short that you’re forgoing dental floss to make payments.

However, we’re in The Great 21st Century Stagnation and everything’s at least a little askew.

Here are the actual current mortgage numbers. The average 30-year mortgage right now goes for a minuscule 4.33%, which still dwarfs the average 3.85% that 15-year mortgagors are paying. The difference between the rates has never been this big. Ever.

This summer, the median home in the United States sold for $176,400 according to the first chart on this page.

Aside: some esoterica from that chart.

If you bought the median house with an average-priced 15-year mortgage, how big would your monthly payments be? Here come the math:

You really need to stop complaining. “Waah, I suck at math. I’m no good with numbers (giggle).” It embarrasses us both.

Would you say “Waah, I suck at English. I’m no good with words” in public? Of course not, you’d sound like a tard. How is this any different?

Ten years ago, the average 30-year mortgage went for 7.96%. Let’s plug that interest rate into the above expression and see how much house we could have bought with such a mortgage back then, given the same monthly payments.

Yes, today you can pay a house off in half the time it would have taken to pay off the exact same house (plus a medical supply table) in 2000.

In other words, God wants you to not only buy a house today, but be free of your debt obligation no farther in the future than O.J. Simpson’s not guilty verdict is in the past.

Everything beyond this is speculation, but the Fed chairman has indicated that he wants to keep inflation low and money tight. Maybe taking him at his word is foolish, but it seems as though mortgage rates can’t fall much lower. If you’re looking at a 15-year mortgage, and the economy stabilizes between now and 2025 (which of course it will), your 178th, 179th and 180th payments could be awfully palatable and the checks downright fun to cut.

(Thanks to TheMortgageReport.com, which we didn’t crib from to write this post. But it’s one of the very few well-written and informative blogs on any subtopic of personal finance. And Dan Green, the guy who runs it, makes awesome charts.)