Without going into too many details of my younger years, I can let you know that I had incurred about $50,000 in consumer debt during 1998 – 2000.  With little to show for it, I was putting a large chunk of my earnings as a then single mom into minimum payments.  All of it was going to interest.  Here is how I dug my way out of debt – and how I remain in control of my finances today.

Details of the Debt

Poor choices during my late teens left me a single mom with over $50,000 in credit card debt and a large personal loan to a friend.  My salary was modest, but my expenses were looming.  I had nothing to sell, as the debt had been incurred during a relationship that left me with a couple pieces of crappy furniture and many receipts for golf, dinners, and who knows what else.  Needless to say, I was now on the hook for someone else’s purchases, as all of the lines of credit were solely in my name.

While I legally could have looked a debt settlement or bankruptcy, I didn’t feel good about either option.  I may not have swiped the card myself, but I enabled someone else to do so in my name.  I owed money, and everything I knew in my gut said that I needed to pay it back.  I looked into several possibilities, and it was only after I met my wonderful husband, that I was introduced to the world of credit counseling and debt consolidation.  He had signed up with a reputable company that was helping him to get back on his feet after a bad business deal, so I followed suit.

Paying it Back… Month after Month 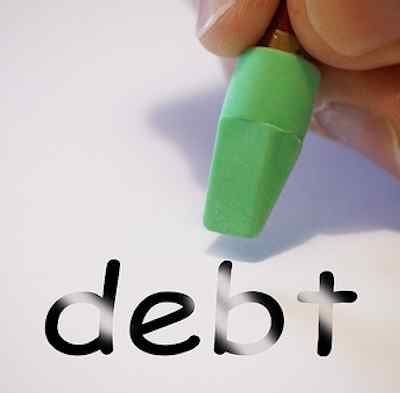 From that point on, it was really a matter of sticking to the plan.  My cards were closed by ME, not the card company, leaving my credit history with good marks.  (Despite my debt and difficulty in paying the cards, I always paid at least the minimum and didn’t have any late payments.)  I paid one monthly sum to the consolidation company, and they dispersed it to the credit companies.  In return for my guarantee to keep paying, my rates were lowered considerably (0% in one instance.)  I was actually seeing progress in my war on debt!

Paying over 1/5 of my income to debt was painful at first, especially since I had to deal with the hurt and anger that surrounded the previous bad relationship and how hard my new husband had to work to help me make the payments.  It was through this arrangement, however, that I realized just how solid my marriage was, and we vowed to always approach our financial obligations with the same sense of responsibility as we did this debt from the past.  In just four short years, we had paid it all off.  The personal loan from a friend was paid off three years after that.

The moral to this story is fairly straightforward.  It is possible (and wise) to pay back enormous amounts of loaned money – even if you did not benefit in any way from the debt.  Today’s society seems to have all kinds of quick fixes to address the consumer debt problem, and we rarely hear about those that quietly trudge on in their repayment… month after month… year after year.  My spending habits have remained modest, even though we no longer that that large monthly payment to accommodate.  (Of course, we now have 5 kids, a house, and some cows – you do the math!)  I do use credit cards, pay them every month, and use them as a tool for advancing my financial goals – not a safety net for catching poor decisions.

Do you have a story of debt repayment that you would like to share?  We hope you can use this as an opportunity to inspire and encourage others!