White House released projections indicating that the Federal Budget Deficit will rise by almost $9 Trillion by 2019. The new figures also indicate that the national debt in 2019 would have risen to about $23 Trillion, or 76.5% of the GDP. 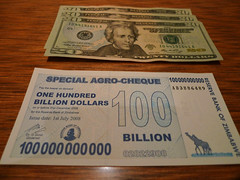 How will we as a country spend $9 T more than we take in over the next 10 years? Either we will need to borrow the $9 T, or we will need to print more money to pay for spending (or some combination of both). Raising tax burden on personal and corporate incomes are not an answer (doesn’t mean it will not be tried) as it has been historically observed that the tax receipts manage to stay constant at 19.5% of GDP regardless of the level of marginal tax rates. It is also important to note that increase in tax rates will have the effect of suppressing the GDPs so any attempt to raise tax revenues by raising the tax rates will eventually backfire in the form of lower growth and lower tax base.

Let us look at the two remaining options.

US can borrow more to pay for the projected budget deficits: Certainly a part of the budget deficit will be paid for by increasing borrowings. The problem with this scenario is that already many of our traditional lenders (read China) are getting squeamish about the deterioration in the US balance sheet quality and would demand increasing returns in the future if they choose to continue to fund the US borrowings. This means interest rates will rise to compensate for the increasing lending risk, which will dampen the US economic activity as capital becomes more expensive. It also means that the debt burden on the future generations will increase significantly and the debt repayments will become a greater proportion of the US national budget. Even today the US national debt as a proportion of GDP teeters on being unsustainable, and any further worsening may become a trigger for the problem to spiral out of control.

Worse case scenario includes the possibility that the US will default on one or more of its debt obligations.

US can inflate its way out of the problem by printing more money: Most US domestic obligations (such as medicare and social security) are inflation adjusted, so printing more money is not likely to improve the fiscal situation in this respect. However, the interest payments on the currently outstanding debt (treasuries, munis, federal bonds, etc) are fixed and printing more money will certainly help in devaluing these debt obligations.  The problem would be any future new debt issues. Lenders will certainly demand a premium to compensate for the inflation risk.

Worse case scenario includes the nightmare scenario of hyperinflation as the government loses control of the monetary policy. I personally think that this is a feasible scenario and something that we should all be worried about.

In either case, we can all look forward to a significant devaluation of the US dollar in the world markets, rising interest rates, and high inflation. The only way to counter high inflation and rising interest rates would be a spectacular spike in productivity in the US (more production with less capital employed). Maybe alternative energy or nano-technology have the potential to generate this productivity spike. Maybe not.

In any case, it is prudent to re-arrange your assets so you will be better prepared for inflationary environment. I will add one more piece of advice if you are convinced that high inflation is a real possibility (and I do so fully expecting to be chewed up and spat out by the politically correct financial advice providers for doing this). Take as much debt as you can afford today and invest in assets that will retain its value during inflation such as real-estate, commodities, stocks. And make sure the debt you take on has fixed interest rate. That way, when the inflation really hits, your income will grow, the assets you invested in will increase in value with inflation, but your debt payments will stay the same (or decline relative to your overall financial picture).

Uncontrolled leverage caused the financial bubble, but prudent leverage can save you in the aftermath.

Shailesh Kumar is an Entrepreneur, investor and blogger. He writes about value investing at Value Stock Guide. Learn about the stock market and discover the techniques proven to work best for long term investors for finding appropriate stocks to buy in their portfolio to get superior risk adjusted returns.