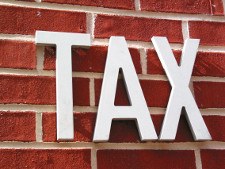 While you are gathering up your information for the tax preparer and considering what sorts of deductions and credits you are eligible for your 2009 taxes, it is also a good time to start planning ahead for the coming year. One of the best things you can do for your finances in the coming year is to actually consider your options, and make tax wise plans for 2010. You can even discuss your possibilities with your tax professional when you go in to have your 2009 tax return prepared. Here are 5 tax moves to consider for 2010 (and we give you a bonus at the end which you may or may not be too keen on):

This is a big one. The first time home buyer tax credit was extended by six months, so if you haven’t bought a home before, it could be worth a tax credit of up to $8,000. For those who are thinking that it’s about time to trade up, the government added an expansion worth up to $6,500 for those who have lived in the same place for five of the last eight years. While the $6,500 tax credit may not be worth deciding to buy a home out of the blue, it could be worth it if you have been planning to move in the next one to three years.

2. Upgrade the Energy Efficiency of Your Home

The government is offering a tax credit for green home improvements made through 2010. You can claim up to 30% of the first $5,000 you spend making energy upgrades to your home. There are bigger tax credits available for those who decide to install a solar home heating system or make other major overhauls. You can also combine these federal tax breaks with state and local tax breaks that may be available.

If you have some investments you have been holding on to for a while, 2010 might be the year to sell them. Right now, the top rate on long term capital gains is 15%. However, starting in 2011, the top rate will return to 20%. If you have been thinking about cashing in on some of your investments, and you are in a higher tax bracket, it might be worth it to consult a financial and/or tax professional to see whether it is in your best interest to sell this year and avoid the higher tax rate.

This has been generating a lot of interest lately. For 2010, the income restrictions associated with rolling over a traditional IRA to a Roth IRA are being lifted. (Realize that this only applies to rollovers; income restrictions on contributions to Roth IRAs remain in place.) In a Roth IRA, your money grows tax free, and you aren’t taxed when you take distributions. However, you should realize that you will be taxed on previously un-taxed amounts that you convert to the Roth IRA. Luckily, you can divide up these costs between your 2011 taxes and your 2012 taxes. Carefully consider whether this is the right move for you, consulting with a financial planner, since the Roth conversion doesn’t make sense across the board.

Gift taxes are paid for by the giver. Everyone has a lifetime gift tax exclusion of $1 million, allowing them to avoid gift taxes on that amount. If you want to skip a generation, though, the tax exemption has been at $3.5 million. But next year things change, and that exemption returns to $1 million. But 2010 is a special year: There is no limit to the exemption. So you could give as much as you want this year, and take advantage of the Generation Skipping Tax Exemption. On top of that, other gifts that go beyond your exemption are taxed at a top rate of 35%, rather than next year’s 55% top rate. As you might imagine, if you are going to be generous, this is the year for it.

This year is a good year to die. For your heirs, at any rate. 2010 is the magical year of no estate tax. The estate tax exemption, which has been at $3.5 million for some time, is reverting back to $1 million in 2011. But for this year, there is no limit to the estate tax exemption, effectively eliminating estate taxes for 12 months. There are already some predictions that December 2010 could see an uptick in deaths as those bent on passing on their estates attempt to make sure that half of the value isn’t lost to a 55% top rate. Of course, there is a very real possibility that legislation could retroactively instate the estate tax for 2010.

You can benefit from planning ahead. Understand what your options are, and think about the moves you can make throughout the year. Whether it is contributing to a 529 plan for a state tax break, keeping track of mileage traveled while doing charitable work, keeping track of possible itemizations, or paying points on a mortgage loan, if you think ahead and engage in proper planning, you can increase your tax efficiency each year.