One of the most exciting world cup games was played yesterday between Germany and England, with some controversy. The World Cup is the world’s biggest sporting events and it only keeps growing; as a big football fan I have been following most of the games in South Africa this year and as a personal finance enthusiast I have noticed some parallels between the World Cup and investing. 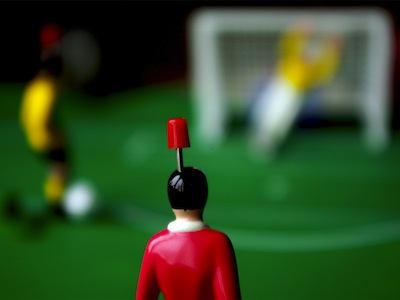 Past Performance is Not Indicative of Future Results

No two World Cups are the same and nobody can predict with 100% accuracy who will win, just because a team performed well in the last World Cup does not mean they will win again. Just look at Italy and France, last World Cup’s finalists did not even manage to qualify out of the group stages.

It is very similar in investing, just because a specific stock or mutual fund performed well one year, one cannot expect the same results the following year. Always remember that past performance is not indicative of future results.

In every World Cup there are big surprises and shocks, who would have expected Switzerland to beat Spain or Italy to be knocked out in the group stages? Big shocks is just part of the game and that’s what makes it beautiful.

Five years ago nobody would have expected Lehman Brothers to go bankrupt or AIG to be on the verge of bankruptcy, but it happened. Nothing is for sure; do not be surprised if your “sure” investment goes belly-up. Be prepared for anything, the unusual is possible.

Football is a team sport. There are great players like Messi and Podolski, however alone they cannot achieve anything. It’s always about a team effort and unselfish acts. Everybody on the team has to carry their own weight and be responsible for their tasks.

The situation is similar in investing and personal finance, it’s a team sport. The involved parties could be spouses, investment advisor and even children. All parties have to contribute their share in order for the plans to be successful.

You Need a Strong Defense.

Over the last two years most investors have learned the importance of a strong defense. Everything is great when our portfolio is enjoying substantial gains, but things can fall apart in a matter days. It often takes just a week, or even less, to destroy gains of over a decade; and it may take another decade to recuperate all those losses. A strong defense is vital in an investment plan as without it your portfolio is hopeless.

Patience is critical in football, rushing the ball down the field and taking long shots will never win you a game. Just ask team USA who needed a win in the last group game against Algeria to move on and it took them 91 minutes to score the goal.

Patience is also critical in investing, trying to time the market and make a few quick bucks will not ensure you a comfortable retirement, but patience and discipline will go a long way.

World Cup is about a lot more then just football!