What You Won’t Talk About Colors What You Will 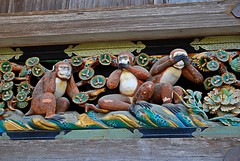 Thank you to J.Money from Budgets are Sexy for including this in the Carnival of Personal Finance. Saving money’s sexy too, so please consider subscribing for free tips and easy money management solutions.

Religion and politics. Aaack! I said it. There are things you just don’t talk about. But how does what you won’t say, affect what you will?

Even as personal finance writers, we’ve broken that taboo of discussing money, but how much is our writing, our concepts of a need vs. a want, and our general stance on money, colored by other taboos?

What if you knew someone was in ridiculous amounts of debt, and just found out they were pregnant? Would you say congratulations, or ask if they’d thought of any “alternatives” to their pregnancy? I bet it depends on how much huevos you got, and what your fundamental system of beliefs is.

If you blamed part of your financial status on the actions of a certain politician or governmental regulation or entity how would you comment to another person who believes it was the right thing to do?

I remember a pf blogger who’s blog actually got me into this whole mishigas (don’t know whether to hug him or shoot him), but he strongly believed in tithing. Out of everything, that generated the most commentary, the most discussion, and the most venom. What would you do if your atheistic financial planner dismissed it as foolishness? Would you hide that budget line when you went in for your discussions?

A while back, CNN ran a great piece called Religion and money: The price of faith. Until then, I knew the additional costs my personal beliefs entailed, but I hadn’t really thought outside of my own box.

It’s much harder to stick to your system of beliefs when they are under direct scrutiny. It’s much easier to attack another when sitting behind a keyboard. Personally, I’ve always felt that the comments I read show more about the commenter than they do about the initial writer.

It’s difficult to be balanced writers anymore. Maybe that’s why so much of journalism has lost it’s allegedly unbiased nature. There are personal opinions, fundamental beliefs (possibly what you’re raised with), political investments, and spiritual callings.

I personally refer to things that fringe on the religious or political as a “personal spiritual issue” when asked in the blog world. Why? Because whether or not I believe in anything, is generally irrelevant to the topics at hand. Overgeneralizing it in the way that I do allows the reader to assume it is whatever they choose, whatever they can live with. I already know what I can live with, and am quite content in my system of beliefs, but the average person…is not me.