Ever since I got new place and did an inventory of my necessities and niceties, I figured out I was overspending at my old pad. Common things I realized I didn’t need, use, or even want were eating up an eighth of my paycheck. Read on below to see what they were, how much it used to cost, and how to replace it with something cheaper.

Landlines are antiquated. Comcast charges $29.95 a month for unlimited talk and text on their landline phones for six months, and then shoots back up to $39.95 -$44.95 a month.  I was also surprised to see accessible voicemail listed a premium service. There’s no reason to pay for a landline anymore, not if you have an Internet connection and a cellphone. You can use free services like Skype, Google Hangouts and Google Voice to connect via video or phone chat for conversations. If you find that you spend lots of time on your landline, consider upgrading your cellphone bill to unlimited talk –I’m confident it won’t add an extra $50 to you bill like a landline does. [Also See: 4 Reasons to Keep Your Landline] 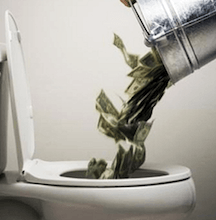 I used to buy lots of bottled water, especially when I was on an exercise kick. I would buy about half-dozen gallon jugs a week, each costing about $2 each. That’s $12 a week, or $48 a month, or $576 a year. Yikes. I’d also end up kicking empty jugs around and filling up my trash way to quickly. Not wanting to make my new place dirtier than it was inevitably going to be, I figured I’d find a water filter. I went ahead and bought a Bobble jug for $23.43 at Amazon. Filters last a couple months and cost $8 at Target (note: I’ve read the reviews, and some people complain about slow filters, but I haven’t had a problem yet. Hopefully it stays that way, cause I like this thing).

Do you like to binge on shows, watching an entire season the day before the newest one comes out? Do you like to watch movies when they’re ‘on’ TV, but don’t necessarily find yourself running to a Redbox? Then ditch your cable TV provider and get Netflix or a Roku. In 2011, the average pay TV service hit $86 a month, and is growing at 6 percent annually, according to the NPD Group.  True, some bundles will offer better deals and include Internet, but those only last so long. You don’t want to get a $49 a month special for TV and (slow) Internet for six months, and then all of a sudden be locked into $100 a month. I use Netflix’s streaming-only service for $7.99 a month and hook up my computer to the television with a $5 HDMI cable.

I thought I was getting a good deal for a one year’s worth of virus protection by McAfee for $29.95. And then I figured out I could just get free virus protection from Avast!, CCleaner, or Microsoft Security Essentials. In my experience, virus protection does nothing. I scan everything I download with Avast!, and I regularly sweep my computer for cookies and old registry files with CCleaner.  The result? No infections. Just be careful where you plug in your credit card information, change your email passwords every three to four months, and keep an eye on your bank account for unusual charges.

Out of everything on this list, this was the hardest. It was also one of the more expensive ones. Of course, if your coffee sucks, you’re not going to go straight back to $7 lattes. Grab these tools:

You’ll also need beans. That cost is a variable, but it should run you maybe $8 a lb. If you have a Trade Joe’s, they have some great, cheap beans for sale. Buy them whole, and chop them before using the French Press or coffee maker. If you want to make a latte, heat up some milk (or soy milk’) in a pan and use the frother as it’s heating. Add some sugar for a sweeter flavor; it’ll turn into a thick, foamy froth that will sit on top of your coffee.  Now you can make simple lattes that hit the spot and save money.

Have you cut anything out of your life after you figured out how much money you were wasting? Let us know in the comments.