by Andi B. | Personal Finance | 4 comments 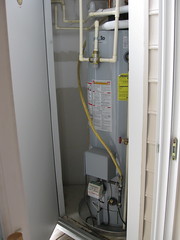 Yesterday, Mr. B and I woke up and tried to get ready as usual. Unfortunately, the water heater was not cooperating and our showers were a little tepid. Apparently the element is going out on the water heater in our apartment. I’m not surprised, as a friend of ours who actually works repairing water heaters told us it was 19 years old.

The great water heater debacle actually has become a bigger question regarding renting vs. buying for us. It was wonderful to go to the apartment manager and let her know, and know that they had to take care of it (somewhat) promptly. However, since it happened later in the day, the maintenance man wasn’t able to start the project because it would’ve gone too late for his schedule. It will be taken care of tomorrow morning, and I get to shower in the clubhouse this morning. (At this point I’m grateful I have a place to shower.)

While I may have had to take care of it myself, and run down people to call, I could’ve secured someone who would’ve fixed our water heater by tonight, and I wouldn’t have had to boil water to wash my dishes, and I wouldn’t be waking up an extra half hour early to shower in a public shower.

Of course, there is also a financial concern. Since I package a home warranty into necessary home expenses, items like a hot water heater would be covered. Maintaining a home is expensive, but I crave control over my own domain. I know I’m completely out of my mind, and that owning a home is a money pit, but at this point I’d rather be beholden to subcontractors I can yell at, rather than an absolutely wonderful apartment manager who can still evict me (not that she ever would).