State of the Union: Can Barack Obama Kickstart the Economy?

Warning: The following constitutes my opinion. Take it with a grain of salt. I’m not an economist. And I’m a progressive (without party affiliation). 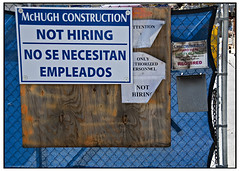 Last night, President Barack Obama delivered his first State of the Union Address. Acknowledging some of his own mistakes, reminding people that the mess he inherited could hardly be fixed in a single year, calling for bipartisanship and unity, and presenting an ambitious list of things he’d like done going forward — especially in terms of helping the economy, the President managed to restore a little of the old magic that got him into office. A CBS poll taken just after the speech showed an 83% approval rating of the State of the Union Address.

Even though people are revved up now, and even though all of the economic stimulus ideas sound nice, the real question is this: Will Obama’s policies help the economy?

What President Obama Wants to do for the Economy

Since jobs seem to be the thing on everyone’s mind, the President made an effort to address that very issue. He unveiled plans to help businesses by providing a tax incentive for new hiring, as well as for investment in new equipment and new plants. He also wants to take $30 billion of the money repaid by Wall Street banks and use it to help community banks so that they can extend more credit to small businesses that hire new employees or that raise wages. Helping small businesses, and providing more security for workers, would certainly help the economy. It would instill confidence, as well as encourage businesses and individuals to spend a little more. And we all know that the U.S. economy relies a great deal on the spending done by consumers and businesses.

Additionally, Obama highlighted the fact that rebuilding our infrastructure and developing alternative energy technologies should be priorities. He insisted that green jobs and an upgraded infrastructure would help the economy, since these items provide a need for employment. Not only would we be able to increase our efficiency, but green energy projects and innovation would reduce our dependency on foreign oil. Obama even included nuclear power in the clean technology category, and managed to get even Republicans to applaud that move (they didn’t applaud even the tax cuts). We do need an improved infrastructure, and being able to build one while putting people to work would certainly help the economy. But it will cost a lot of money, and the deficit is growing.

Obama once again reiterated his commitment to the middle class, but pointing out that he did cut taxes for middle class workers earlier this year, and that tax credits for things like homes and cars benefit the middle class as well. He expressed a desire to help the middle class, and insisted that would be his focus with education reform, health care reform and financial regulatory reform. Honestly, a little more help for the middle class is probably a good thing. But, once again, the immediate stimulating effects might be outweighed by the costs down the road. Sometime, someone is going to have to raise taxes to pay for the recent cuts and the spending.

And, finally, the President laid out plans for a spending freeze on certain areas of the government. With the deficit ballooning at a rapid rate (although much of the economic stimulus deficit spending took place before Obama’s administration, the current government has certainly been keeping the pace), Obama insisted that spending need to be brought under control. While a spending freeze is certainly a step in the right direction, Republicans make a valid point when they point out that the freeze doesn’t apply to the biggest spending areas of the government. $250 billion is hardly anything when laid next to the trillions in deficits we’ve got right now. But it’s probably better than nothing.

If implemented, many of President Obama’s ideas could probably help the economy. In fact, if many of Obama’s ideas had been implemented at the beginning of the year, in the form he wanted them implemented, we’d probably be much further along with economic growth. (We’d have a bigger deficit, too, though. Of course, down the road the economic growth might have outweighed that. Or not. Maybe we’d just have more debt with crushing interest payments and an economy in worse shape long term. That’s for the economists to hash out with their often conflicting theories.)

The reality is that there is a limit to what any president can do. He can offer policy ideas and try to get those implemented, but most of it is out of his hands. Health care reform is a good example. The “reform” bill that has been dubbed “Obamacare” looks almost nothing like what the President wanted while he was campaigning and bears very little resemblance to what he asked for at the beginning of summer 2009.

A smaller example is the economic stimulus package. Obama wanted more job creation in that package, but settled for a compromise that cut the total cost of the bill, leaving out job creation but leaving in plenty of pork. And that’s the rub. Instead of just creating legislation that does one thing, Congress likes omnibuses with riders, cramming in as much pork as possible. The truth is that even if spending bills for helpful things are passed, they will probably be inflated with the kind of pork that gets individual Congresspeople re-elected while adding to an already-dangerous deficit. And, unfortunately, Obama has been going along, supporting the legislation once it’s passed, and doing his best to sell it to the American people.

In reality, we are a nation crippled by our own inconsistencies about money. People expect government to alleviate more of their problems (provide jobs, fix the health care system, offer Social Security, provide an education, etc.), but they don’t want to pay for it with tax dollars. (Make no mistake. Taxes are going to have to be raised at some point. Heaven help whatever President and Congress get to make that decision.) They want the deficit to shrink, but they applaud Senators and Representatives who bring pork barrel projects to their areas, infusing districts with federal funding.

No matter what the President says, and no matter what he may like to have happen, the bottom line is that Washington is set up to maintain the status quo. All the ideas and eloquence in the world won’t change that, and Obama is likely to find himself a frustrated president unable to do much of real impact for the economy while partisan bickering continues as each party worries more about taking the other down than actually attending to the people’s business.