It’s probably not often that a guy talks about a bridal shower.  For one thing, men aren’t traditionally known for their love of kitchen utensils.  A bigger factor is that we’re not even invited to the thing.  While our spouses to be are off feigning supreme interest in a new blender we are generally out with our pals, having a beer and watching a college football game.  That said, I want to talk about the personal finance of bridal showers anyway.

My wife might be better suited to write this article, but I fear she might sugarcoat the whole thing.  What I want to accomplish is to as objectively as possible, analyze the true worth of our bridal shower bounty today.  Three years ago we came home with a ton of nice gifts, but what do we have to show for all that effort now?  Not very much, just three short years later.  I do not wish to come across as ungrateful, and there is nobody to blame but us anyway–after all, we designed the registry.  But, the facts are the facts.

I remember helping my then fiancee’ (and now my wife) as we lugged bag after bag of presents into our apartment.  We received every single item we asked for on our registry.  We felt spoiled and truth be told we were.  We tried our best to be reasonable on our registry, but we still managed to ask for some things that in hindsight now seem sort of ridiculous.  At the time I was about to finish my second year of law school and my wife just received her masters.  We were twenty-four and twenty-three years old, respectively.

The bridal shower was beautiful.  I know this because I had the distinct pleasure of going after everything was already over and helping to carry the gifts out.

When we got home even I was excited by all of the new items.  It wasn’t the same since we were still years away from getting our house (which we just bought and moved into), but it was still sort of wondrous.  I like to cook so I was more excited then I will ever publicly admit (other then now) by all the new gifts we had.

We received brand new bedding. Pots and pans.  A handmixer.  A Kitchenaid stand mixer (Those things are expensive!).  Plus, we received everything we needed to furnish our bathroom.  To round it out we had fancy utensils and plates, and on and on.

In short, we got just about everything a kitchen or a bathroom could ever need along with some bedding and other miscellaneous items for the bedroom and the rest of the living spaces. 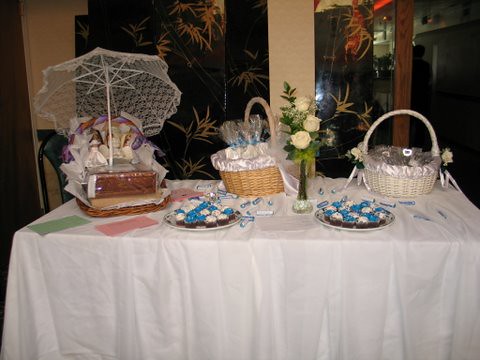 As I wrote above, we recently moved into our new home, and perhaps that has something to do with it; but three short years later I look around and we have barely used a large majority of the gifts we were given. Another large section of gifts have been broke or replaced.  I think our list will help guide shower gift-givers as to what gifts will do a better job of standing the test of time.    So, here it is, our list of what was useful from our shower as opposed to what was perhaps a waste of money.

Useful Items We Still Use

– Our pots and pans.

– Our regular everyday dishes and glasses.

– 1/2 of the cooking utensils we received.

– Some of the bar type glasses and utensils.

– A fancy looking but unpractical teapot.

Items We Have Barely Used

– The other half of the cooking utensils we received.

Items That Have Already Broke

– Most of the toasting flutes we received.

-Bathroom accessories (Note: My recommendation is to never purchase metal objects for your sink such as toothbrush holders, because they rust and ruin your sink if you’re not careful).

So, there you have it: in the span of just three short years, and despite receiving more than $3,000.00 in gifts, we have almost nothing useful to show from our bridal registry.  It seems like a waste, in some ways.

Here is my personal vowel: to never gift someone a picture frame.  Let’s face it: by the time a couple actually gets to the alter they will have more picture frames then they will ever know what to do with.

The takeaway, I’ll be the guy trying to convince my wife to bring the trashcan to the shower.  It may not be a sexy gift, but at least it will likely still be in use a few years later.

On the bright side, at least Mrs. DP and I are still together three years later, even if we are nearly half a million dollars in debt.  I have seen some marriages that make the lifespan of a toasting flute look long in comparison, particularly in my job as an attorney.

What has been your experience with showers?  What items do you recommend giving as shower presents?  Where do you disagree with our list?