As the economy continues to deteriorate and banks around the world have reduced interest rates to near zero, we see more and more Central banks talk about “Quantitative Easing”.
What is Quantitative easing, how does it work and how does it help the economy to recover? Not many people are familiar with the term and how it works, so let’s take a closer look.

If you want to learn more about investing, check out Excess Return and download a great free Investment Guide E-Book!

What is Quantitative Easing?

In layman’s term, the Central Banks reduce interest rates to near zero and then flood the markets with more money supply to promote private lending. The central banks basically print money, nowadays done electronically, and purchase bank assets, thereby increasing money supply, this brings down the interest rates further. The idea is that now the banks have more money available to lend to consumers and businesses who in turn can spend the money back into the economy. 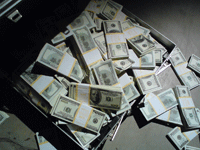 Let’s take a look at the possibilities. First of all the banks are not under any obligation to lend out the money, given the banks current balance sheets they might just hold the cash in their accounts instead of lending it out to consumers as intended.

If we assume that they are willing to lend it, consumers may not want it. Real estate prices have been on a decline and families are worried about their jobs, not many are willing to take on new debt.

Any of the two scenarios will be counter productive and Quantitative Easing will fail.

The goal of Quantitative Easing is to increase inflation, with all the extra money being printed there is a very real chance of high inflation rates and even hyperinflation at which point we will have a new issue to deal with.

The problem here is that this whole recession is due to high levels of debt, so by trying to solve the problem by creating more debt is not really a solution, its more of a distraction. Those who have debt are trying to pay it off with any extra income available and not accumulate anymore debt.

Quantitative Easing in the past

Just a look at Japan’s attempt to stimulate the economy with Quantitative easing in the early 90’s it did not work for them, what is to say that it will work now?

I guess we will find out a few years from now whether it worked or not, personally I believe we are setting ourselves up for another big failure.

Quantitative Easing what do you think?