Do You Have One of the Most Stressful Jobs of 2014?

We all think that our jobs are stressful at some point. When you’re under a deadline, or when you are trying to catch up, or when you are dealing with upset customers, you probably feel as though you have the most stressful job in the world.

However, Yahoo! Finance has a list from CareerCast of what the most stressful jobs for 2014 actually are: 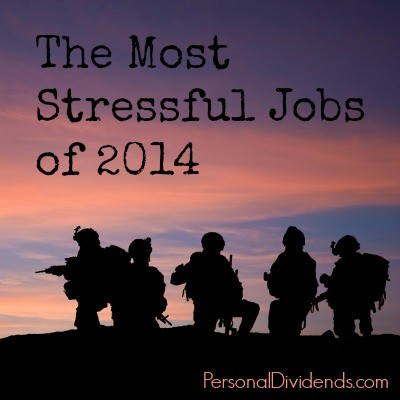 It makes sense that enlisted military personnel would have the most stressful job. When you think about what it takes to be in the military, especially if you are active duty and you are on what is considered the “front lines” of modern warfare, it becomes easy to see why it would be difficult and stressful to do this job.

What Makes a Job Stressful?

Of course, one of the things that makes being an enlisted “grunt” in the military is the pay. It’s a tough job, and the median salary (which means there are people making less) is $28,840.

CareerCast takes into account a number of factors when determining how stressful a job is. Some of those factors include amount of travel, deadlines, being in the public eye, consequences of errors, and whether or not your life is at risk. The stress factor also includes whether or not your decisions can put others at risk.

When you think about all of these factors, you can see why some jobs are more stressful than others.

I was a little surprised to see newspaper reporter on the list, but then I thought about the situation. I write for a living, but being a newspaper reporter isn’t just about the writing. There are deadlines, and there is pressure to report accurately. Added to all of this is the fact that competition for newspaper jobs is on the rise as the industry continues its slow, inevitable slide into oblivion. Looking at your job prospects when you’re a newspaper reporter right now must be stressful itself.

Does Your Pay Make Up for the Stress?

Another consideration is the amount you are paid. In some stressful jobs, the pay can partially make up for the fact that you are under stress. High-paid executives have stressful jobs, but it’s not like they’re firefighters with more stressful, life-threatening work and much lower pay.

When you think about the stress associated with your job, it also makes sense to think about the pay, and what you can expect from the job. Are you paid enough to overcome the stress? When you are at your most stressed, are there are other rewards that come with the job? Police officers and firefighters often feel pride and accomplishment in their work. Sometimes, that makes up for the stress and relatively low pay that can come with your job.

When you think of stressful jobs, do any of these come to mind? How stressful is your job? And what makes it worth it (or not worth it)?