by KathrynV | Money and Psychology, Personal Finance for Couples | 8 comments 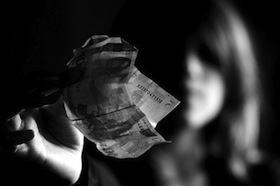 Most of us try to take a practical, reasonable approach to money. We make budgets and educate ourselves about personal finance. However, no matter how practical we may be, at least a small part of our financial decisions are based more on emotion than logic. The way we view money affects the way that we deal with money — and men and women often have very different feelings about finances.

Since men and women have different experiences regarding earning money, they will feel differently about it, in general. Men, on average,  still earn more money than women in many job fields.  As a result, women may feel like their work is less valued, creating a desire to protect their incomes and succeed in earning money.

Even in two-income homes, women may feel somewhat dependent on their spouses who earn more money. This can lead men to feel a lot of pressure to be the caretaker and can lead women to feel less independent than they would like.

Some women may rebel against this feeling of dependence by becoming excessively interested in hanging on to their financial independence. In turn, men who don’t contribute financially may feel insecure and unsure how they could best support. The situation has been exacerbated by an economy in which men are losing their jobs faster than women.

As a result of these differences, there may be regular conflict and power struggles in the household. These may revolve around money. However, they may also revolve around other areas of household management such as chores. Understanding the underling psychology and feelings that are causing the sense of imbalance in the home can lead to more harmony in the household.

Women today still often feel insecure about their ability to completely understand financial issues. (This is one of the 7 most common money fears.) As a result, women are less likely to invest money than men are. Women who do invest tend to do so much more conservatively than men, reflecting in part the male tendency to be willing to take risks. There are benefits to both the conservative and the risk-taking approach to investments. Because of this, a male-female team can really work well together to invest successfully if they are able to work out their differences around the issue.

Women and men both tend to shop for both practical and emotional reasons. For example, both men and women may shop to fit in with others and maintain a certain status or image. The main difference in emotional spending between men and women is in what they’ll spend their money on.

However, men spend more money than women on many things, including eating out, drinking, sports tickets, consumer electronics and cars.

It’s no secret that men and women communicate differently. These differences are strongest in areas of conflict and around topics that have a lot of emotions attached to them. For many of us, money remains an emotional and conflictual issue, making it difficult to discuss it with others. Learning skills to talk to the opposite sex about money issues can go a long way towards making it more likely that your money choices will be made based on rational beliefs rather than pure emotion. Learning to hear and accept the money choices that someone else is making while articulating and understanding your own issues will assist you in making wiser choices — particularly if you are working as part of a team with someone else to run your household finances.

How have you experienced a difference in the money habits of men vs. women?