Are You Keeping Up With the Joneses – Or With Their Debt?

The latest information from the Federal Reserve indicates that credit card debt is on the rise again. In the years directly following the financial crisis, many consumers reduced their debt load. Household debt – including credit card debt – fell.

However, that is not the case anymore. As the economy slowly recovers, it is clear that many consumers feel more comfortable with spending again. And that spending is often done with debt. Now that people feel a little safer about the situation, they are more willing to take on debt. 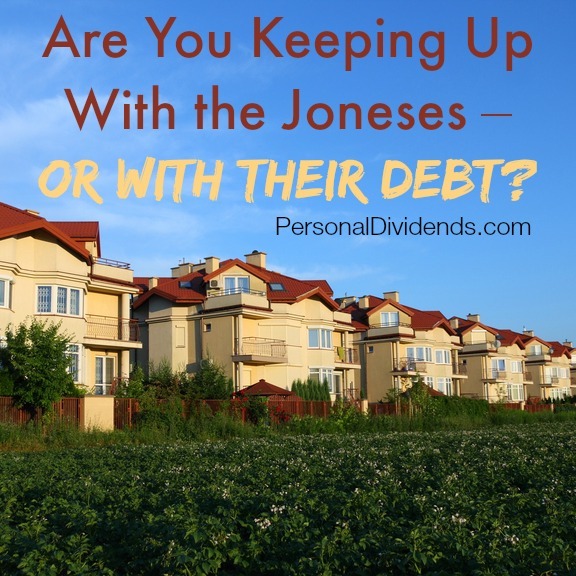 The latest report on household debt from the Federal Reserve shows that credit card debt is up. As you consider your own spending habits, it makes sense to step back and consider the reasons that you are spending. In some cases, we spend money because we see what others have, and we want to be “normal” – or at least show that we have just as much money as the neighbors.

Unfortunately, the truth is that you might not be keeping up with your neighbors’ wealth when you buy things on credit. In fact, chances are that you are actually keeping up with their debt as you try to keep up with appearances.

Many of the things that we consider needs today were once thought of as luxuries. As big screen TVs, two-car households, and other material items become common, it’s tempting to make sure that you are keeping up with others. Everyone else has a smartphone, so you should have one, too. The neighbors just bought a new car, so you should trade in your three-year-old car and get something different.

As humans, we have a tendency to want to fit in with those around us. That sometimes means putting on a show. If you want to let the neighbors know that you are just as rich as they are, it’s tempting to buy that status using your credit card.

The problem with this approach is that there is a good chance that the Joneses also have been using debt to make their purchases. They probably aren’t actually wealthy; they are probably in debt – and you are following them down that path, ruining your own finances.

Stick With Your Own Priorities

Rather than compare yourself with those around you, it makes better sense, especially financially, to stick with your own priorities. What do you want your life to look like? Do you actually care about having those things? Or do you have other preferences?

Instead of looking at the neighbors and trying to have what they have, look to your own life and figure out what you want. What sort of spending makes you feel fulfilled? If you don’t care for gadgets and designer clothes, don’t buy them just to fit in and “prove” to the Joneses that you are big time, too.

Figure out what your own spending priorities are, and spend on the things that are important to you. It goes back to not obsessing over what the neighbors think of you, and making your financial decisions based on what works for your life. You’ll be happier that way – and you will be more likely to actually become wealthy, rather than looking it while you actually drown in debt.