Why Don’t You Want to Talk About Money?

It’s still fairly taboo to talk about money. Not too long ago, a survey came out that indicated that most Americans would rather talk about their weight than talk about their finances, and parents aren’t overly keen to address financial topics with their children. 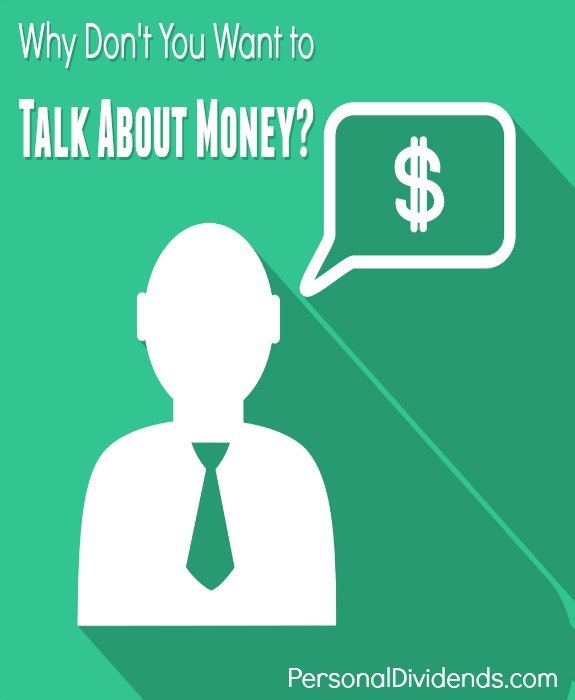 A recent study from Fidelity, addressing women and money, discovered that many women are “uncomfortable” talking about money. Indeed, many women are more comfortable discussing intimate details with their doctors than they are with the idea that they might have to talk about money with a financial planner.

It’s Not Just Women, But It Seems Harder for Women to Talk About Money

Of course, it’s not just women that have a hard time talking about money. Talking finances is a taboo in our society in general. Some of the reasons that we might be reluctant to talk about money include:

Another thought I had about why it’s more difficult to talk about money than to talk about medical issues is that we already have an instinctive trust for doctors. We know that they are professionals, and we are in a private, safe setting with a health care professional. Meeting with a financial planner seems different. We don’t view them as professionals in the same way, and there isn’t that same level of trust that we feel with doctors.

I’d be interested to see whether or not men also feel that same level of discomfort talking about money. We know that many men don’t want to talk about money, either, but are they uncomfortable to the same degree? My guess is probably not, just because of the socialization differences between men and women, but I could be wrong. 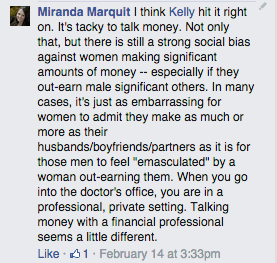 Why You Should Talk About Money

If you are in a relationship, honesty about money, and making decisions together, are important parts of building a strong foundation. You can’t work toward the same goals if you aren’t on the same page. Additionally, if one partner knows all about the money, but the other doesn’t have a clue, that can be problematic down the road if something happens.

Talking with your children about money is also important. When you talk to your kids about money, you can help them learn valuable lessons, and get into the habit of examining their own money practices.

While you don’t have to talk about the minutiae of your situation with strangers, or tell your kids all your deep, dark money secrets, it still makes sense to talk about money to some degree. Avoiding the subject altogether is likely to do more harm than good, and it could keep you in deep financial trouble for years to come.