Could You Live Below the Poverty Line?

We’ve been hearing a lot lately about the wealth gap in the United States, as well as the growing number of poor people.

For 2014, the poverty line is drawn at $11,670 in annual income for a single person. For a household of four, you are considered to live in poverty if your annual income is $23,850 or below. 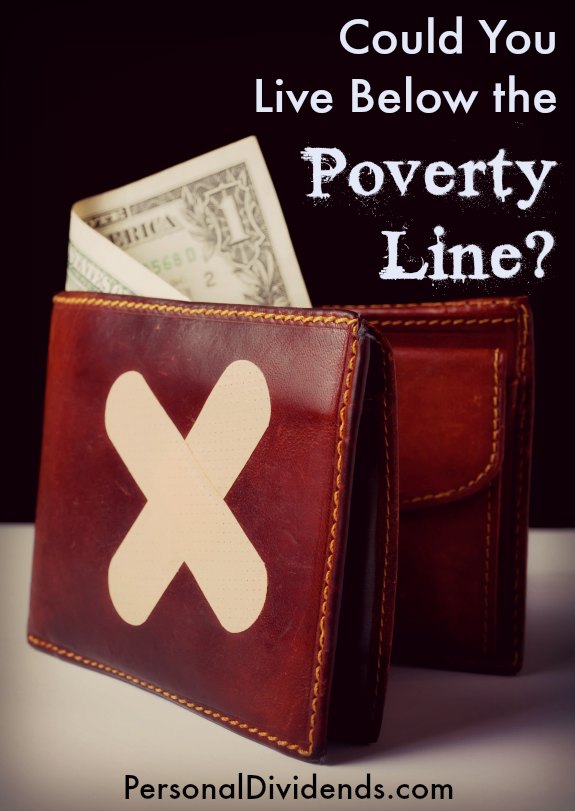 Could You Make It Work On Poverty Wages?

Just because the numbers seem low, though, doesn’t mean that some families don’t make it work. Many of them use some sort of federal assistance to help out. Others live in extreme frugality to make it work. And others end up turning to credit, and live paycheck to paycheck, watching their debt levels creep higher every year.

Look at your own household spending. Do you think that you could live below the poverty line? What would you have to give up in order to make it work? Is it even reasonable, with your current habits, to assume that you could make it work? Consider: If you divide $23,850 by 12, you end up with a monthly income of about $1,987.50. Now, add up what you pay for mortgage + insurance + utilities. Just those items alone might very well put you over the poverty line, depending on where you live.

Do You Feel Poor?

Many of us, even if we aren’t “technically” poor, feel less than wealthy. If you are in this camp, take a few minutes to consider your situation. Are you really as poor as you think? If your income puts you above the poverty line for your family size, it’s worth reconsidering. Think about what you have in terms of non-money wealth. Good health, family, friends, interesting activities, and other items can make up for a perceived lack of money. And, of course, you can always re-evaluate your spending to see if you can improve matters for your budget.

What do you think? Is the poverty line an accurate measure of what’s poor? What does being poor or rich mean to you?