Book Review: The Skinny on Willpower 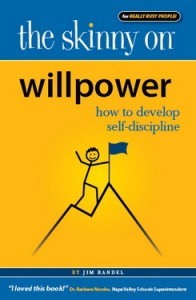 Being sincere isn’t a sufficient condition for writing a self-help book. Jim Randel’s The Skinny On Willpower is yet another installment in the lawyer-cum-author’s The Skinny On series, (childishly) illustrated books that convey the details of time management, networking, success etc., using stick figures.
Seriously.

The Skinny On gimmick boasts that it condenses important material for the busy reader, if you can consider consuming a The Skinny On book to be “reading”. With The Skinny On Willpower, your reviewer has now made it to the end of three The Skinny On books – making him perhaps the only person on the planet to do so while being neither a Rand Publishing employee nor a Randel family member.

The Skinny On Willpower is everything you’ve ever read in a self-help book and can recite after a lobotomy, distilled into a booklet devoid of angle, showmanship or presentation. What distinguishes Randel from other self-help authors? Well, he disdains Rhonda Byrne’s The Secret, which he should. Randel’s just a little more vocal about it than most of us. The content of The Skinny On Willpower is so unremarkable, one can only attack the form. Randel may be an abysmal writer, but he is consistent. The same bugbears in Randel’s other titles are also on display here:

-plugging other titles in the series in the middle of the book? Check.
-quoting liberally from as many authors as he can think of? Check.
-refusing to use contractions, in the faint hope Queen Victoria might buy a copy of the book? Check.
-self-congratulation, like a line about how football kickers “exercise dominion over harmful thoughts and kick them out of their mind (good pun, huh?)” Check.

Self-help themes are so universal that it’s hard to sound original while writing a self-help book. In the last 20 years, the only inventive works that resounded with this reviewer were Hyrum Smith’s The Ten Natural Laws of Successful Time and Life Management and Harvey Mackay’s Dig Your Well Before You’re Thirsty.  But those books were written by real authors. Even in this necessarily derivative genre, The Skinny On Willpower is as derivative as it gets. If there’s an original thought in this book, aside from the unorthodoxy of using stick figures to convey a point, I didn’t see it.

Make your goals specific. Shun negativity. Set realistic expectations. Don’t compare yourself to others. Nothing good comes easy (sic). The journey of 1000 miles begins with a first step. Discipline turns (conscious) activities into habits. Willpower is directly connected to mind control. There are no shortcuts. Beating your kids for the fun of it can be cathartic.

Those are all actual quotes from the book, followed by one that would have made The Skinny On Willpower semi-interesting had Randel chosen to use it.

Randel does introduce one concept, kind of – the difference between moderation and going cold turkey in changing behaviors. But he doesn’t argue for one over the other.

By frame 132 (Randel uses frames, two to a page, rather than pages), we get another one. It’s the first phrasing in the book that was unfamiliar: “ego depletion”. It means that once you commit to something difficult, it makes it hard to commit to much more than that. Don’t quit cigarettes and heroin at the same time, I guess. This book, like other titles in the series, is so monotonous and so simplistic that it forces a writer to search for adjectives. “Puerile” is the one that fits best so far.