Book Review: The Skinny on The Housing Crisis 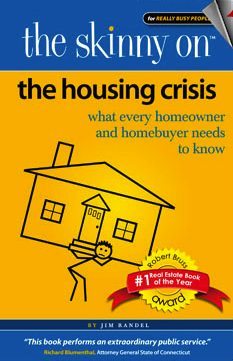 The Skinny On The Housing Crisis is the fattest title in Jim Randel’s The Skinny on series, running 269 pages. The cover blurb is written by Connecticut attorney general and U.S. Senate hopeful Dick Blumenthal, the guy who said:

In Vietnam we had to endure taunts and insults, and no one said, “Welcome home”

despite never having served in Vietnam. That quote is about as dependable as this one:

The Skinny On The Housing Crisis was released 16 months ago, and is as dated as a gallon of milk from that time.

I’ve already assailed the childish format of the The Skinny on series, so I won’t repeat it here. This book – along with the five other volumes in the series – chronicles the adventures of a stick-figure couple looking to learn about the financial world. As it’s an illustrated book, Randel uses frame numbers (two to a page) rather than page numbers.

The first 15 or so frames of The Skinny On The Housing Crisis are almost identical to their counterparts in Randel’s equally unreadable The Skinny on Real Estate Investing. Apparently his stick-figure couple watches a lot of late-night infomercials and enjoys repeating conversations.

The book is loaded with punctuation mistakes. As a reviewer, this is annoying. As a reader, it’d break the sale for me if I were thinking about forking over the $13 Randel expects. The Skinny On The Housing Crisis won the Robert Bruss Real Estate Book of the Year award, leaving open the question of whether Paris Hilton’s Confessions of an Heiress was eligible. If it was, it should have beaten The Skinny On The Housing Crisis.

By frame 34, we learn that you shouldn’t use a mortgage lender who works in the same office as a realtor. Randel seems convinced that mortgage brokers are even less ethical than attorneys (Randel’s day job.) One sequence shows a mortgage broker granting a stated income loan to a filthy applicant who claims he clears $300,000 annually. So people shopping for houses told bald-faced lies to brokers, and therefore brokers carry the moral obligation for believing them. As Homer Simpson once helpfully explained to Marge, “It takes two to lie – one to lie, and one to listen.”

Randel’s inability to stay on point is so profound that at several times I checked the frame numbers to confirm that the publisher didn’t bind the pages in the wrong order. Randel does use several panels to explain the concept of second mortgages, which means you should read this before you read its companion volume, The Skinny on Real Estate Investing. In that book he references second mortgages without describing them.

This book is ostensibly intended for rookie audiences, yet Randel insists on introducing unfamiliar terms without defining them. “Mortgage brokerage fee”, for instance. And there it is again, page 68: Randel introduces concepts like “private mortgage insurance” and “loan-to-value (ratio)”, without saying what they are. One sentence later, it’s as if those terms never existed.

Here’s a free one for any aspiring non-fiction writer: assume your reader isn’t as familiar with industry jargon as you are. Randel’s refusal to do this makes for what will be a frustrating read if you attempt to slog through The Skinny On The Housing Crisis. Which you shouldn’t, because buying this book is an investment with a negative return.

Randel assumes the average realtor is only slightly less dishonest than the average mortgage broker, and that there’s no code of realtor ethics, and that a realtor can’t lose her license for violating it. Appraisers are untrustworthy, too: according to Randel they’ll appraise a house for more than its worth, because the mortgage broker who recommends the appraiser wants the house to hit a “target value”.

This makes no sense. Won’t a cheaper house sell faster? So the mortgage broker gets a slightly smaller cut. But he also gets it without working as long, and doesn’t have to worry about ethics violations.

The stick-figure couple buys a house before getting an appraisal, which is insane. There’s no excuse for Randel not pointing out the absurdity of this, and imploring readers to get the appraisal first.

Randel explains that during the real estate crisis, unethical buyers would apply for a loan worth more than the price of a house, give the seller slightly more than his asking price, and pocket the difference. He doesn’t cite any real examples, and besides, this criminal scheme seems like the kind of thing that’d be easy for a lender to figure out. Anyhow, at this point in the book the stick-figure couple’s realtor keeps encouraging them to raise their already fair offer.

Incredibly, a publisher allowed Randel to get away with sentences like

If you are shopping for a loan today, you should check with both mortgage brokers and with banks in order to get a good read on market rates.

Also, if you want to know what the weather’s like, you should go outside and look at the sky.

Randel continues with more unfounded allegations. For instance, people raised their credit scores by becoming “authorized users” of their friends’ credit card accounts. Would you let your friend have unrestricted access to your credit card?

Randel dismisses Fannie Mae and Freddie Mac with 1½ sentences. In a book about the housing crisis. This is like writing a book about World War II and not spending more than 12 words on—you know, the guy. German. Bad facial hair. Murdered lots of Jews.

This isn’t a book so much as it’s a crappily organized middle school research project. Randel borrows from Robert Kiyosaki, Stephen Dubner and Steven Leavitt, and the guy who wrote Confessions of a Subprime Lender. (Another tip for aspiring writers. Titling your book “Confessions of” anything is very original.) Randel even cribs an entire definition from Wikipedia, without taking a few seconds to rewrite it and make it his own. On almost every page, there’s a quote from or a recommendation for another book. Randel should have put these on the cover, and saved people the trouble of opening his weak offering.

While I’m dispensing advice, some more for Randel:

1) It’s not an “ATM machine”. Nor is it “NFL league”, “FAA administration”, or “DIY yourself”.
2) Don’t start a sentence with “you see.” You see, people will find it condescending that you felt the need to tell them to pay attention if your prose is too weak to do it itself.
3) The “brain surgery” metaphor hasn’t been fresh or inventive for about 25 years now, give or take.
4) A possessive takes an apostrophe (Randel’s incompetence). A plural doesn’t (the world has enough Randels). Thank you.

Randel does seem to be one of the few writers who understands the difference between i.e. and e.g.

-You can find home price estimates at Zillow. (He doesn’t mention this, but you can find exact sale prices at your county assessor’s website.)
-Your mortgage broker shouldn’t personally receive more than 1% of what you borrow. Of course, this assumes the broker will disclose his fee to you.
-Adjustable-rate mortgages are for idiots, unless you’re the chairman of the Federal Reserve Board and know exactly in which direction interest rates will head.
-Assuming you didn’t read the previous point, there are adjustable-rate mortgages that punish you for paying early.

If Randel was selling this as a history book, fine. Is it really important to know that subprime borrowing led to people occupying houses they couldn’t afford in 2006? If you’ve ever read a news story in the recent past, presumably you know this already.